Oscars 2014 Was Relatable For The Most Part 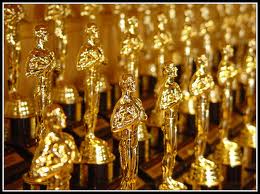 The Conversation Circle had fun watching the Oscars 2014 last night. We were a little disappointed that the writing for the monologue wasn't more evident. It seemed Ellen DeGeneres was left to do a lot of ad-libbing, which made it her performance feel a little too low-key to us. We did like DeGeneres' teasing of Hollywood itself and the lines Robert DeNiro delivered when presenting the Writing Adapted Screenplay award. DeGeneres' "selfie" (that crashed Twitter) in the A-list section of the auditorium was fun and highlighted her brand of sunny and silly, but DeGeneres lost us on the pizza. Did that mean the telecast was dragging on? Overall critics felt DeGeneres' performance was flat or uneven, but we thought she was fine. Thanks to DeGeneres' talk show, America is familiar with her brand. The highlights for most of us were, Jared Leto's Classy Acceptance Speech , Lupita Nyong'o's Inspiring Oscar Acceptance Speech ,  Dancing in The Aisles at The Oscars, and Pink Rocked Wizard of Oz Tribute At Oscars 2014. Pink updated and killed "Somewhere Over The Rainbow." How long has that song been around? We're not sure what Jimmy Kimmel's sketch was about (maybe competition with Jimmy Fallon's sketches that seem to trend immediately), which seemed awkward and made us flip the channel. Ditto for his post-Oscar show. After that sketch we were in mood to stay up for that!