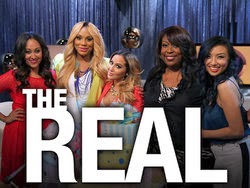 Looks like The Real a talkie, whose panel includes Tamar Braxton, Loni Love, Adrienne Bailon, Jeannie Mai and Tamera Mowry-Housley, will get its roll out on 18 Fox Television Stations O&Os beginning next fall.  We have to say, Tamar Braxton has taken the ball and run with it. We've watched Braxton on "Braxton Family Values" and some of "Tamar& Vince," as they say she's a piece of work! We'll see if the other four women can keep Braxton (she is the baby of her family) from sucking up all of the attention. Odd choice for Fox you say, not really. The Real passed a four week test run in seven markets. Fox is betting The Real, and shows like it, will help them reach a "new generation of viewers."
'The Real' To Roll Out On Fox O&Os Next Fall
Adrienne Bailon Fox Television Stations Jeannie Mai and Tamera Mowry-Housley Loni Love Tamar Braxton The Real