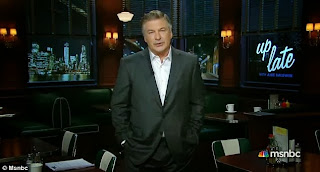 With the mutual parting of MSNBC and Alec Baldwin's Friday night show, should the cancellation of "Up Late With Alec Baldwin" be considered a programming failure for MSNBC or just another self-inflicted wound by Baldwin? "Up Late With Alec Baldwin,"was suffering from low ratings and MSNBC seemed to have a hands-off approach in planning and formatting the show. However, the average TV viewer is well aware of Alec Baldwin's "hot head" persona and thus his brand. So why would MSNBC give Baldwin a show, then run for the hills when Baldwin acts like, well, "Alec Baldwin!" MSNBC did know they gave Alec Baldwin a show, right? To be honest, we were a little surprised when Baldwin was given a show. Now we suspect MSNBC will fall back to its lazy programming on Friday nights and send its viewers back to "Lock Up" (which suffers from even lower ratings).