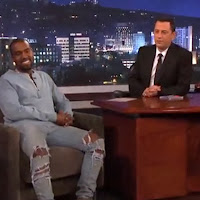 We're not sure if Kanye West did himself any good with this Jimmy Kimmel sit down. The background  for this awkward appearance is a comedy bit Kimmel aired about West based on an interview with BBC Radio 1. The Conversation Circle thinks if you can't laugh at yourself, then you're taking yourself way too seriously. We find it odd when those who seek fame and celebrity are then bothered by the unpleasant side dishes that come with the main dish. In watching how intense West looks, we're reminded of the television commercials that run selling The Dean Martin Celebrity Roast on DVD. (Oddly, one of our kids was drawn to the roast and Dean Martin's Variety Show commercials.) Talk about touching a nerve, but they are funny as hell! Anyway, we don't think a celebrity roast is in Kanye's future! You be the judge:


Jimmy Kimmel Apologized But Kanye West Did Most Of The Talking As They Settled Their Feud http://t.co/9ysM7OhwbO via @nikkifinke
— ConversationCircle (@ConversationCir) October 10, 2013