Miley Cyrus Not in Vogue? 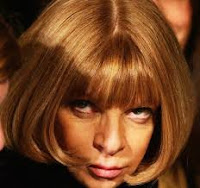 There's buzz in the fashion world that Anna Wintour,  the inspiration for "The Devil Wears Prada," and star of "The September Issue" has canceled Cyrus' December cover issue. Wintour's decision stems from Miley Cyrus' raunchy performance on MTV VMAs.  Is this more Shock and Outrage?  We're a little surprised that Ms. Wintour would take this stance. Vogue may have seen the same profit from Cyrus' cover that MTV got from her performance.  Just an aside, one of our members said she gets the oddest looks whenever she carries her Prada handbag!
Anna Wintour MTV The Devil Wears Prada The September Issue VMA 2013 Vogue