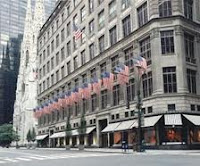 Regionally, for those in the CC who love fashion, we have been watching Lord&Taylor’s transformation (Actually a renovation, we do hope they do the lower floor!) and wondered if it would draw customers from a Saks store 2 blocks away.  While we did notice a few former Saks employees working at L&T, (For the record a former Saks employee is a member of the CC.) for the most part, the stores do not appeal to the same customer base. However, what impressed us was Lord&Taylor’s ability reinvigorate itself without losing its original identity. It’s a specialty store with broad rather than mass appeal.

Some in the media have noted the purchase would allow Saks to reinvent itself, however we think Saks has a deeper issue and would do better returning to its roots. We have heard women refer to Saks’ clothing lines as trendy-trashy and sizing that is off.  Regionally, these women have shifted to Bloomingdales and Nordstrom.  Some industry insiders also noted that Saks doesn’t feel luxurious. We think luxury can be derived from attention to customer service. So along with injecting Saks with capitol, we do hope it will be injected with a customer service overhaul.  It’s one thing for customers to be snobs, quite another for the employees to be that way too!

The Saks of our mothers and grandmothers will never return. We do think Saks can broaden its appeal by returning to its chic, but classy days.  Trendy has its place, but it shouldn’t be ¾ of the inventory. There should be room for updated conservative lines that are building blocks for a fabulous wardrobe. There are lots of women and men who will pay for clothing that is well made, but that discerning shopper wants it to last longer than a nanosecond! We do wish Saks lots of luck. Some in the CC shop there several times a year. We’d just like a reason to shop there more often.