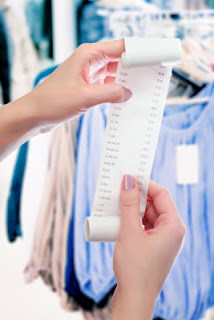 Recently one of the CC members purchased several items of clothing on their credit card. Within one day an item, unworn and tags intact, had to be returned. While this should have been a simple process, the member had a receipt, it wasn’t. The  sales associate asked for her driver’s license.
The member was taken aback. She knew retailers were cracking down in an effort to stop compulsive returning, potential fraud and the return of worn items.  She gets that. Compulsive returns do drive up the cost of merchandise. In past years, policies were so liberal customers returned items to get subsequent markdowns. That was absurd. How could retailers make a profit?
But now the pendulum has swung in the opposite direction. Some retailers want a receipt and your driver's license.  One retailer, Michaels, was at least honest enough to admit they are tracking customers who return. So does that now mean a customer should feel they can’t return merchandise for fear of being put on a list! To add insult to injury, Michaels demanded a driver's license for a cash return (with receipt) of less than $5! This is insane.
Well, we in the CC think there should be a threshold on tracking returns. If you have a receipt, the items are unworn, tags are intact and it's within the stated time period for returns, no driver's license should be required. That CC member has made a commitment not to shop at retailers who ask for a driver's license to make a return.
Retailer Store Returns