Is the War on Moms a manufactured story?


Some in the conversation circle were outraged by the media’s response to Hilary Rosen’s comments regarding Ann Romney.  By the way, Ms. Rosen’s decision to use Mrs. Romney to make her larger point was unfortunate, but what was her larger point? For the media to glom onto the story for a day would have been fine, but to now manufacture a War on Moms controversy is insulting to our intelligence.
For the most part, the CC members are mothers and understand being a mom is work, being a stay-at-home mom is a job, being a working mom means you have two jobs! Some women would love to stay at home with their children, but can’t mainly for financial reasons.  Some women would love to work outside of the home, but the cost of childcare in some cases is prohibitive. So, let’s get to the heart of the manufactured story. Isn’t this so-called War on Moms about the women who have the option to stay at home and those who don’t? This is not new or news to women.
The mainstream media’s coverage of the so-called debate is disappointing and revealing. Rather than add to the so-called debate with a story about cuts in programs that help families and children, the media took the easy way out. Perhaps the real story should be diminishing or nonexistent programs that help working parents, the cost of quality childcare, the need not to end early learning programs and what we can do as a society to give women more parenting options.  That’s not a real story, is it? 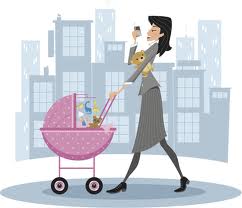