Trying a new model in a well-established primetime period is going to be difficult. If Jay Leno’s talk/variety show is successful he will break new ground in recent network television programming. Network primetime schedules for 1950-51 list two variety/comedy shows in the lineup for the 10:00pm timeslot and in 1959-60 at least five variety shows were in the same timeslot. However, there has never been 5 consecutive nights of variety programming in a network primetime schedule. 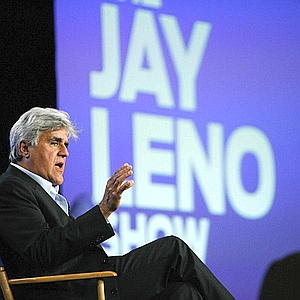 Industry professionals argue this is an economic play by NBC to cut costs. Insisting expectations for ratings will be lower and the margin for success greater. This is a big gamble for Leno, but not so much for NBC considering they are in 4th place.
We in the CC were wondering if the slide back to 1950-60’s programming is the brainchild of marketing geniuses. Especially since one of the most popular shows on television “Mad Men”, a period piece beginning in 1960 and current fashion tends evoking the 1950’s are in. Of course Leno will put a twist on an old formula, but perhaps Leno will tap into the same psyche that is making period material appealing.
Jay Leno Mad Men NBC network programming primetime Variety Shows