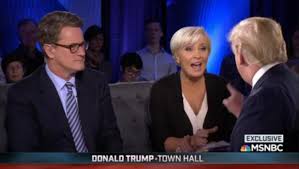 Back in May, cohosts of "Morning Joe",  Mika Brzezinski and Joe Scarborough announced their engagement. This was not a surprise to viewers of the show (their body language alone betrayed them!)

But now it appears Mika and Joe are claiming they have been the victims of an exhortation attempt, that involves Donald Trump, The National Enquirer and White House Staffers. Yikes!

This story is bizarre. Why would anyone go to the trouble, as it seemed, for years, Joe and Mika were attracted to each other? Their announcement in  May only confirmed what was to many a forgone conclusion, Mika and Joe, were or would be intimately involved at some point.