There's an old saying, that famous people "go in threes". That seems to be true. Last week, Aretha Franklin, the legendary "Queen of Soul" and civil rights activist, who was the soundtrack to the lives of so many people for over forty decades, died.

Next Senator John McCain, the so-called "Straight Talker" who had been battling brain cancer, passed. Leaving many to acknowledge his duty to country and his graciousness in acknowledging his defeat in the 2008 Presidential election. He will be remembered for his decades-long service to our country. 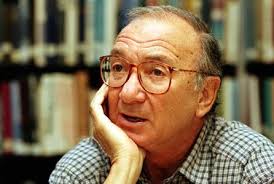 We then learned playwright, and one of our inspirations, Neil Simon died. He will be remembered for his humor, among some many gifts he shared with the world, and plays like "The Odd Couple", which made for great television, "Barefoot in The Park", "The Goodbye Girl" and many others. I had the pleasure of attending a lecture he gave (as a favor to my professor) to my class. It was all top secret until he made his appearance. We were awestruck. These three famous people will not be remembered for who they were, but for what they gave us.