If Clothing is Dying, Whose Fault is It 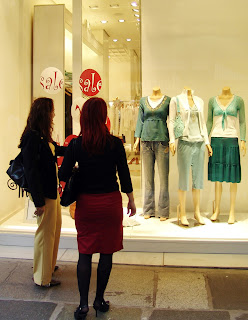 Recently while reading an article on Bloomberg "The Death of Clothing", we were reminded again that America has come a long way from its heady days of packed department stores, and the need to walk around with the item you were thinking about purchasing, lest it be snatch from the rack.

That was yesterday. Today habits have changed so much stores are consolidating or closing. The new trend in "not shopping" for clothing has hit retailers with sizable debt the hardest.

While we generally agree, from our experience in retail, the desire for luxury clothing, be it knockoff or not, is still pretty high. Fashionistas on Instagram have huge followings, and from what we're told there are two distinct groups keeping luxury afloat; the wealthy (they can afford to shop and spend on "experiences") and the hip urban crowd (who judge affluence and influence by "what you're wearing).

The desire for designer handbags has remained pretty steady. Purchasing a bag is a lot more cost effective, as it can be carried endlessly (whether appropriate or not). However, a recent test of a chain on a designer handbag did not sound or feel like there was any metal present at all. Conversely, a chained designer handbag we compared from six years ago had the feel and sound of metal.

It appears to be the group in the middle that seems to have pulled back from shopping for clothing. Expressions like, "I have something like that at home that still has the tag on it" are common. Perhaps a time of over shopping and liberal return policies contributed to the downturn in clothing shopping. Another comment commonly heard from more mature shoppers is "the quality of the merchandise is not the same". This applies even at the higher end of the clothing spectrum.

A Sobering Look At Retail Returns

For sure a change of in lifestyle has had a dramatic affect on clothing shopping. Women seem to think leggings and yoga pants are slacks. Most women feel comfortable pulling on a pair of leggings with a top or sweater.  (However, some women moved away from this trend when they realized it allowed them to gain weight without noticing!) Gone are the days of manadatory dressing for church and holiday dinners. (In the dinner category, dressed up jeans have taken over.)

While we generally subscribe to a fabulous coat (it's the first impression) and a sharp handbag, we're not making a judgment on what makes people feel comfortable. In an obvious effort to stay profitable, cost cutting must be found, but expecting consumers to continue to purchase clothing that has, in some ways, dollar store value (no matter how much glitz and glam that's added), and the life of one season, was bound to catch up with the clothing industry. If Americans have moved away from buying clothing, it is partly the industry's fault.