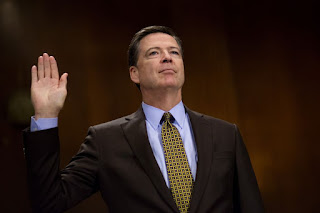 Having released his direct testimony yesterday, former FBI director, James Comey, arrived at the Senate Intel Committee hearing several minutes after 10 a.m. EST. Media outlets have called today's testimony the "Super Bowl of Washington". DC bars opened early with patrons lining up as early as 4 a.m. for, in some cases, politically themed drink specials. Some on social media reported having conference calls and meetings scheduled around the Comey testimony.

Some of the takeaways from the live testimony were: Comey said, "I was fired because of the Russian investigation". CNN online lead with pointing to Comey "called Donald Trump a liar 5 times today". What’s new from the testimony, not much. What will leave a mark? Perhaps the potential for “obstruction of justice” for President Trump.  At the end of the day where Comey's testimony will figure in history, after all of the investigations are complete, is not clear.