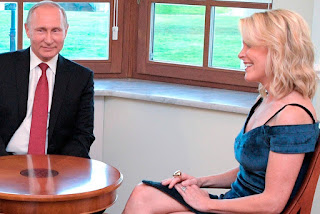 Social media had been busy buzzing about Megyn Kelly's choice of attire, (feeling she was still in what some termed Fox-mode, considering she was wearing a cocktail dress) as inappropriate to interview Vladimir Putin and Indian Prime Minister Narendra Modi, but now the numbers are in and it would seem the substance of the Putin interview in is question too. Comedy Central's Michelle Wolf, ripped into Megyn Kelly saying "Sorry, you're not the new Barbara Walters".

Media coverage of Kelly's news magazine premiere viewership raged from moderate, modest, tepidly received, to those giving a more positive spin of "solid numbers". The reality is, "Sunday Night with Megyn Kelly", finished third behind a rerun of "60 Minutes" and had an "ok debut" according to the ratings.

Much of TCC interest revolved around the perception that Megyn Kelly was directly or indirectly responsible for longtime NBC News reporter Tamron Hall being forced out of the "Today" show. Wolf's commentary may reflect what TCC felt would be the challenge for NBC brass; would viewers accept the former Fox host and will Kelly's Fox audience follow her. Future ratings will be a good indicator.
60 minutes comedy central Michelle Wolf NBC News Sunday Night with Megyn Kelly Tamron Hall