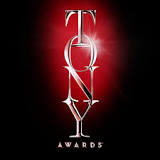 The awards show was down significantly, (some in the media wondered how the 2017 Tony Awards would fair without the play "Hamilton" in the running), dropping 31% in total viewers.