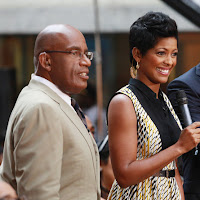 NBC News recently announced that Megyn Kelly, who officially joins NBC News in May, will host a new show that will air in what is the morning franchise, "Today" show's third hour. "Today's Take" at 9AM is currently hosted by Tamron Hall and Al Roker.  Hall has been co-hosting for nearly 3 years and also hosts the program MSNBC Live with Tamron Hall.

According to Deadline, Hall's contract talks are behind NBC News announcing the third hour shakeup. We're sure there are those in the media who are enjoying the pitting of Hall against Kelly, and it's probably good for ratings, but as proven a few years ago (with the Ann Curry debacle) a significant portion of Today's viewers, are sure to be offended if Hall is seen to have been pushed out in favor of Kelly.  It may be wise for NBC brass to tread lightly if they think having Kelly to hang over Hall's head during talks is real leverage.

NBC News execs, if they replace Hall and Roker, can only hope Kelly brings a significant portion of her Fox News audience and matches her "Live With Kelly" co-hosting ratings. Even with the benefit of NBC programming for many of its affiliates at the 9AM hour, Kelly could prove unsuccessful. If so, Kelly will not be the first high profile news anchor to fail in the daytime arena. Anderson Cooper, Katie Couric and Meredith Vieira had short-lived shows.