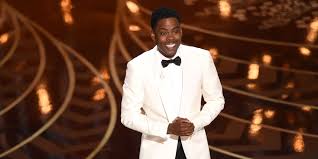 The much anticipated, perhaps for any spectacle that might have emerged, 88th Academy Awards has come and gone! Chris Rock had the hosting duties for the second time, Rock hosted the 2005 Oscars, and we were more interested in Rock's opening monologue than who won what award. Especially after calls for the 2016 Oscars to be boycotted, led by some prominent actors, over the lack of diversity.

How Rock opened the show was going to be crucial. Well, Chris Rock wasted no time addressing #OscarsSoWhite and the calls to boycott the 88th Academy Awards. As for those who suggested he skip the Oscars, (Rock said he thought about not doing the show and wondered why it's always the unemployed suggesting boycotting) in the end rationalized his decision noting "They gonna have the Oscars anyway. The last thing I need is to lose another job to  Kevin Hart."

As for Jada Pinkett, who may have started the Oscar boycott movement, Rock wondered why Pinkett would come if she "wasn't invited". Rock also addressed why people had not protested other Oscars when blacks weren't nominated,  "Because we had real things to protest at the time". We did notice some friends of The Conversation Circle became annoyed with the constant references to "blacks" peppered throughout the show saying, "It's was too much."

It seems fairly obvious Rock was selected to host the Oscars prior to the controversy spinning out of control. However, some speculate there had been rumblings about the "lack of diversity" before the calls for boycotting picked up steam. Rock known for addressing racial issues, (not to mention feeling free to insult celebrities) in his comedy routines, did not disappoint. On a lighter note, midway through the broadcast Rock began selling Girl Scout cookies, for his daughter's troop (because he had been too busy) and signaled which celebrities should be buying. The Girl Scouts raised more than $65,000!