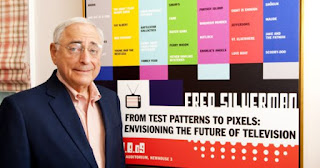 Great piece in TVNewsCheck about the legendary Fred Silverman, currently working on a memoir, who managed to run ABC, CBS and NBC, and put some of television's most memorable shows on the air. One of those shows, which is near and dear to me, being "Cheers". Silverman also ok'd "Real People", which could be seen as the forerunner of reality TV.
Fred Silverman television