Who's Watching 'Grace and Frankie'? 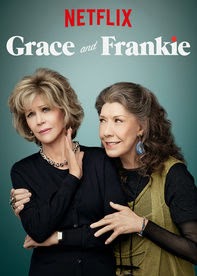 The text message said "You've got to watch 'Grace and Frankie', it's funny". Then for good measure a social media post appeared, "Who's watching 'Grace and Frankie'"? Well, considering our long hiatus, and the post was from an ordinary person (we know that for a fact), we certainly did not want to miss something that was generating this kind of buzz.

"Grace and Frankie", a comedy about divorce, ageism and sexuality, is an original thirteen episode comedy from Netflix. Co-stars Joan Fonda and Lily Tomlin are forced to reinvent themselves after their husbands, played by Martin Sheen and Sam Waterston, announce "they are leaving them for each other". Considering we all have those grandparents who are apt say anything (like the grandmother in the BMW commercial), then this could be a prime opportunity for creators Marta Kauffman, (best known for "Friends") and Howard J. Morris ("Sullivan&Son") to explore a range of funny, but real, issues as they relate to aging baby boomers.  Stay tuned.
Grace and Frankie Howard J. Morris Martin Sheen and Sam Waterston Joan Fonda Lily Tomlin Marta Kauffman Netflix