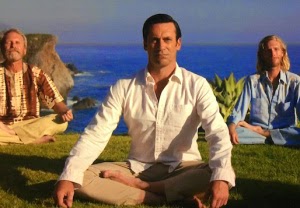 We were excited and actually binge-watched, as much as we could, as AMC ran every episode leading up to last night's "Mad Men" finale, but fifteen minutes into the final episode we had an empty feeling.

Perhaps it was the thought that the show was finally over, but actually we were left unsatisfied with the ending. Peggy finding love with Stan (another workaholic) made us feel even more that she was one of the women, we now know, who were the trailblazers for the women who came after them. This is evidenced by Peggy's desire to help Megan.

Joan, Peggy's polar opposite, if only in appearance, had prepared herself, knowingly or not, to run her own business. She had run Sterling Cooper and subsequently Sterling, Copper, Draper, Pryce credited or not, a full service ad agency, and that's no easy feat. Along the way Joan "handled" the men as best as a woman of her time could. However, in the end, once her son's security was assured, Joan would never again let a man determine her future. And, of course, she didn't "hate her mother". After all, Joan's mother made her professional success possible.

Peter, having won back his family, finally achieved the success he so desperately craved. (Perhaps to prove his worth to his dead father.) The saddest ending for us was Betty. Having finally married a man who was trustworthy and equal to her social standing, she was now doomed to certain death in the not too distant future. What Betty may have finally achieved was the love and compassion of her daughter, and, perhaps the knowledge that she loved Don in spite of his shortcomings. Was Mad Men really more about the women, more than it was the men?

Lastly, Don Draper. "I'm not the man you think I am." Well, yes and no. Did Don's road trip begin the realization of who he really was and who he wanted to be? Perhaps leaving McCann had more to do with burnout and the retreat helped Don renew his creative spirit. And maybe, just maybe, that "chime" that rang out as  Don did yoga gave him that next big idea. The one he took back to McCann. The “I’d like to buy the world a Coke” commercial. After all didn't that Coke commercial, a trailblazer for its time,  usher in a whole new era of advertising?

We suppose Don did find the man he really was and accepted him. Perhaps Peggy, Joan and Don are all the trailblazers that transformed Madison Avenue and women in the workplace. We think that unsatisfied, empty feeling means we're not done with Mad Men.