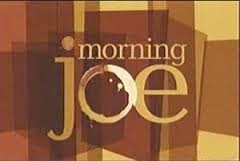 Recent media reports announced Michael Weisman, who was an executive producer at NBC Sports along other positions in cable and syndication, has joined MSNBC's "Morning Joe" as Executive in Charge. With some program tinkering announced last week, (Mika Brzezinski will host a female-focused segment during Morning Joe's final half-hour), it seems doubtful MSNBC will attempt an overhaul of Morning Joe that will address the elephant in the room.

Perhaps continuing a 3-hour block, with the same hosts that seem to have lost viewers, should be revisited. The one-on-one interviews at a table rather than a desk, (these moves from desks, to chairs, to tables is a little disconcerting) seems to have done little to create interest in the show or what is being said. (Especially since the hosts have a habit of frequently interrupting their guests mid-sentence!)

As it stands now, based on ratings, a number of viewers have decided Morning Joe is not worthy of their time. With such talented newcomers onboard, Ari Melber, Joy Reid, Steve Kornacki and Krystal Ball, why doesn't MSNBC utilize these young journalist in the morning? A 1or 2-hour block that attracts millennials (ahead of the 2016 presidential race) could cement a new generation of viewers.

Time will tell if Weisman, who has won 24 Emmys as a sports producer, can make Morning Joe competitive in the ratings again, that is, before it's too late (and any potential audience growth is lost to cemented viewing habits).