It seems David Muir, who recently had his first win, among total viewers in 6 years, at the helm of "World News Tonight with David Muir" against NBC's "Nightly News with Brain Williams", has driven NBC News to hold a crisis meeting. 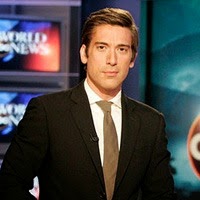 However World News Tonight's recent win could be a glimmer of hope for ABC News. Should ABC News dominate the morning ratings and evening news, which would a historical win, NBC News will need more than a crisis meeting. We've always been fond of Brian Williams, as has America, that's why Nightly News was/is number one. Perhaps World News Tonight's recent win is just a case of "new kid on the block". (Yes, we've switched to Muir too!) Uh, oh.... Calling Olivia Pope.... Oh, that's right, she's over at ABC!