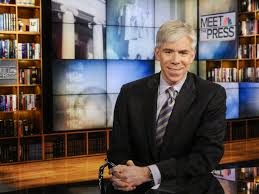 "Meet the Press" is the longest running television show ever, and after more than a decade in the number one spot, (while hosted by the much revered Tim Russert) for Sunday morning political shows MTP, hosted by David Gregory, has dropped into third place behind CBS' Face The Nation and ABC's This Week. MTP's glory days are long gone, and apparently for the past three years getting worse. Now it's been reported that NBC News conducted what it calls "brand consulting" to see how Gregory "connects with viewers. Perhaps if NBC simply checked social media sites and online comments figuring out why viewers stopped watching MTP would be easy.

We don't think Gregory's lack of connection with viewers has anything to do with 'the ghost' of Tim Russert, but has everything to do with Gregory himself.  Gregory seems to lack the hard-driving (he's swishy-washy really) interviewing style necessary to push back on the hacks and seasoned politicians who show up with their endless 'talking points'.  Instead of challenging his guests Gregory seems to accommodate them often using their taking points to ask the opposing guest a question! At the end of the broadcast we often felt disgusted and annoyed with Gregory. In the end, for us, MTP had become a huge waste of time. Can NBC can fix MTP? Maybe. However, a simple set change probably won't do the trick, at this point a change in host may be their only hope.
Related:
NBC's Woes More Than a Matter of Perception?