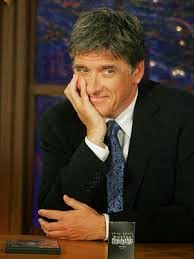 We can't say our members were frequent viewers of "The Late Late Show with Craig Ferguson", which airs on CBS, and therefore have a vested interest in his departure from late-night television, but now we're actually starting to feel sorry for Ferguson.

As most of you know, Ferguson who has been host of The Late Late Show since 2005 was passed over as David Letterman's successor for the "Late Show" (CBS went with Stephen Colbert instead and we wholeheartedly agree with that selection), but now Ferguson is seemingly insulted by Letterman, whose production company produced his show, who read from prepared comments as he acknowledged Ferguson's departure.

We suppose you never have friends in the entertainment business, instead, you have associates, and as long as that association is mutually beneficial you're friends. It's been reported that Ferguson's next television gig will be hosting a syndicated game show "Celebrity Name Game" set to debut in late 2014.  Good luck CF!