The Crazy Ones Likely Cancelled 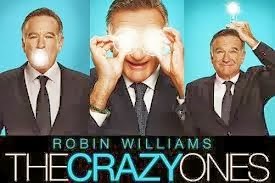 We would be surprised if CBS didn't cancel "The Crazy Ones". Most of our members were a little put-off  by Robin Williams. It's wasn't as if we didn't like Williams, but the show felt a little manic. It made a few of us antsy and we weren't  sure if it was  Williams or a combination of factors. In September The Crazy Ones premiered at 4.0 for adults18-49 and became the season's top-rated comedy. Some media critics pointed to The Crazy's One's big bow being, in large part, attributed to its lead-in "The Big Bang Theory". In October the show ticked up in the ratings and as a vote of confidence, CBS gave the show a full season order. It would seem with the show's ratings not making any significant improvement, even though their time slot swap helped, the show is likely to be cancelled. it's just too crazy!
CBS Robin Williams The Crazy Ones