Why We Can't Watch 50th Anniversary of JFK's Assassination Coverage 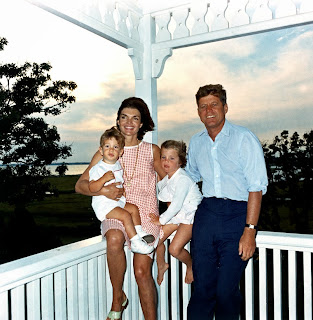 Last night H2 aired, "The Lost Kennedy Home Movies," which were rare home movies of the Kennedy family through the years. Many of us delighted in seeing John F. Kennedy, the 35th President of the United States, in his youth and seeing what he was like long before he would become president. However, most of the media coverage "JFK assassination 50 years later" includes the actual shooting and many of us have decided not to watch coverage of his death. Some of our Conversation Circle members were roughly the same age Caroline Kennedy was when her father was assassinated. We are forever frozen as a 6 year old when we see or hear about that awful day. Inexplicably, a pain in our stomach, a lump in our throats and tears begin to form. Perhaps we were forever traumatized on that day. When we think the media will show the actual shooting we run to turn the television off. It's too much to bear. The day of JFK's funeral we remember sitting in front of a television, some with parents and grandparents crying and wringing their hands. It's seared in our memories. On that day, JFK became every little 6 year old girl's father. There is no way to separate the grief of our families, who for many of us had never seen a father or grandfather cry, from the bewilderment of a child not knowing what to think and enduring a feeling of overwhelming sadness, from JFK's death. So that's why we haven't been able watch any coverage of JKF's assassination after that sad period in our lives. It's just too painful and brings back too many heartbreaking memories.
Caroline Kennedy H2 JFK JFK Assassination media