MSNBC's 'Up Late With Alec Baldwin' Falls In Ratings 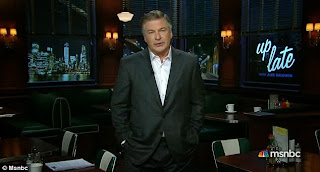 We're hoping Baldwin will tweak "Up Late With Alec Baldwin" so MSNBC viewers won't have to go back to jail! However, say what you want, at least "Lock Up" didn't put you to sleep. While Baldwin is up against Bill Maher, and they draw from the same audience, "Up Late With Alec Baldwin" is boring. How long can you listen to two people talk? Charlie Rose you say? Well, that's PBS and a totally different audience! With Baldwin's persona there has to be a way to liven up the show.
Related: Will 'Up Late with Alec Baldwin' Stop us From Going to Jail