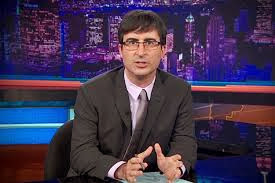 Congratulations to John Oliver! Oliver, our favorite fill-in for Jon Stewart on the Daily Show, will host his own weekly comedy show on HBO. After Oliver's successful summer fill-in stint for Jon Stewart, there was talk of Oliver succeeding Stewart on the Daily Show. However, HBO executives  were watching and impressed by Oliver's hosting performance (Jon Stewart is a hard act to follow) offered him a weekly show. Much like the Daily Show, Oliver's show will take a  satirical look at the news, politics and current events. The show is set to debut in 2014 and air on Sunday nights.
HBO John Oliver The Daily Show