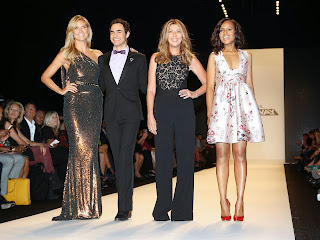 We must admit we were torn last night between watching the final half hour of Project Runway and switching to Scandal. (To be honest we tried switching during commercials, it didn't work out so well.) After all, Kerry Washington was a guest judge last night. As you know, we opted to DVR Scandal. However, judging from the ratings, Scandal is one of the hottest shows on broadcast TV right now. Scandal turned in a 3.3 rating in adults 18-49, up 6% from last week. Scandal is expected to finish the week as the top rated broadcast drama for adults 18-49 (Live+same day). We'll play catch up over the weekend.