The Long Goodbye For Mad Men 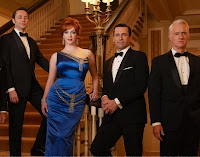 We're not sure if it feels like prolonging the death of someone who is near and dear to you or if it's the feeling of not wanting to let go. Bad boy Don Draper has become part of conscious, as have the other cast members. We discuss the shows as they air and the day after. We hope Weiner will find a life for some of these characters somewhere (as Sex in the City did). We want to know if Don Draper becomes an ultra-right republican in his old age.